What a day! I think we did it all, and then some. We probably crammed a bit much into the day, after just getting over the ickies, but I think we were all sick (literally) of being cooped up in the house and holidays are made for celebrating. We first hit up the Greensboro Independence day festival. In the past we have gone to the parade first thing in the morning, but we anticipated a late evening of fireworks so we opted to sleep in. The festival was HOT! Our favorite part of the day was the fresh squeezed lemonade and the motorized train ride. We tried to do some other rides but the bouncies got so hot they were scalding the kids toes. The festival felt like de ja vu from the Roxboro Personality festival, except this time, JJ got to do the spinning saucer ride (the pictures are funny, because they all look like JJ is on the ride by himself, since you couldn’t see Cailee over the edge of the ride). 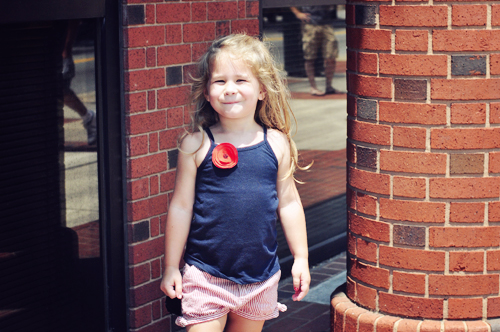 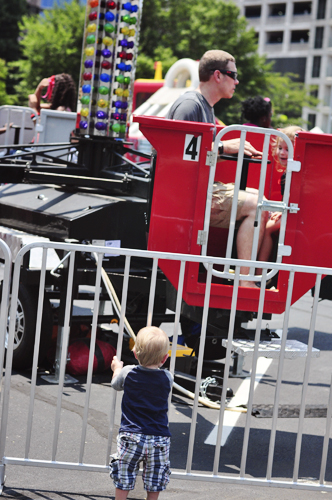 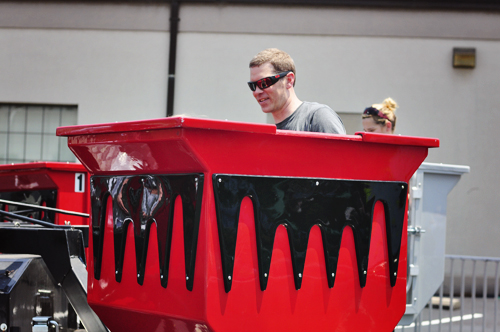 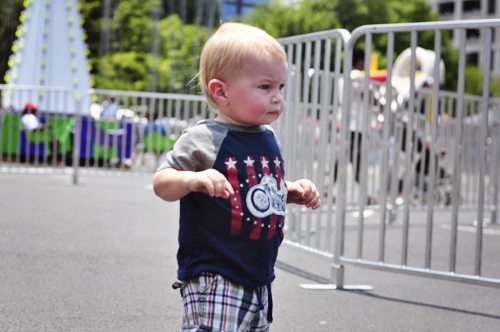 Next, we headed to my parents for good food (enough to feed an army), and a dip in the pool (it was very refreshing after the blacktop blitzer). Cailee identifies my parents as the GG/Gdaddy with one puppy (vs. JJ’s parents who have many puppies). The water was the perfect temp. Connor is still a little restless in the pool, thinking he can swim. He doesn’t want to be held at all. Cailee enjoys the pool so much you have to prod her out of the pool before she turns into a prune (this is after hours). This time, to coax her out, we had to promise she could come back this weekend. I finally got Connor into a hat that he kinda keeps on his head – its pretty funny on him – but it does the trick. He is so fair skinned and gets so red when he’s hot that it worries me not to have his head more covered, especially with the sun reflecting off the water. This one would get wet and I expect it actually felt good on his head. 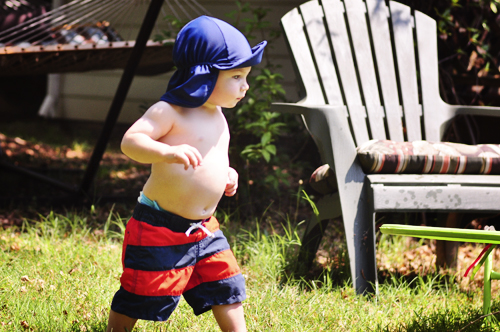 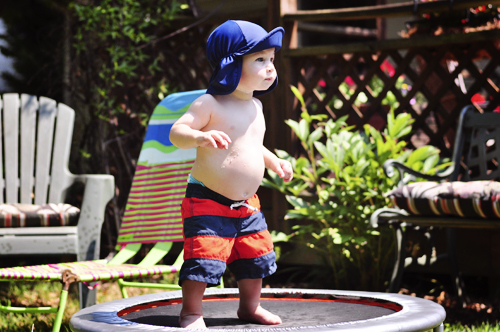 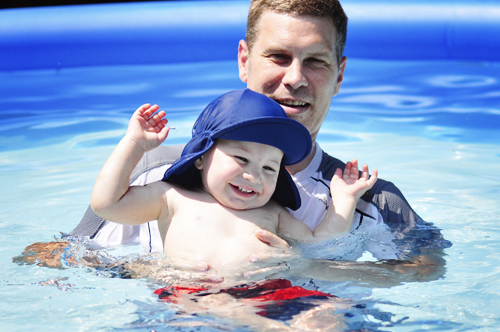 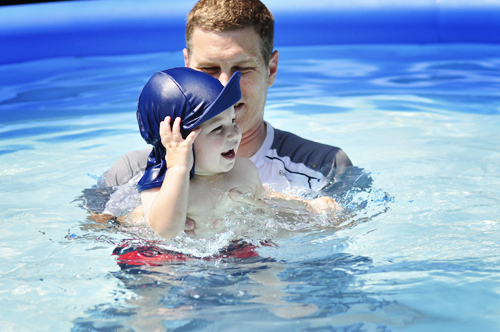 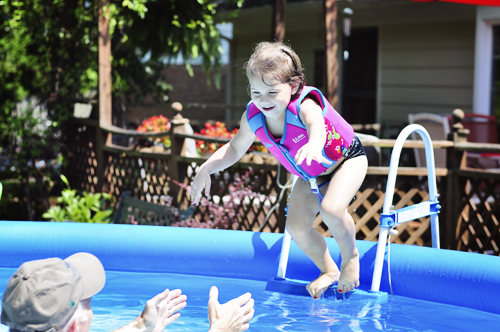 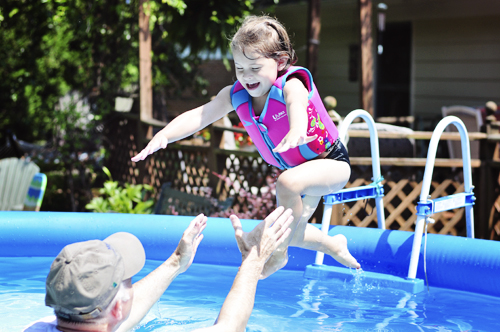 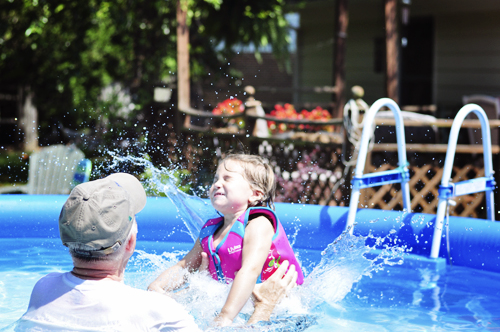 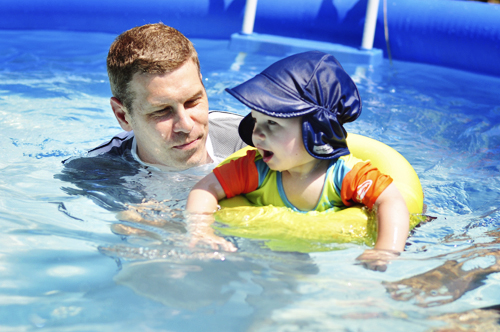 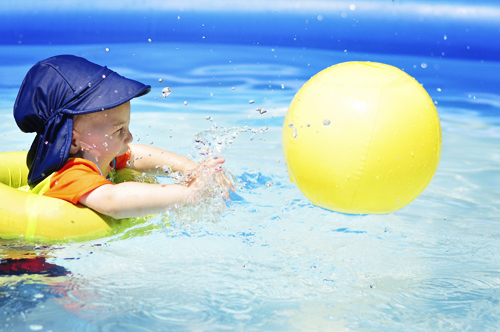 We topped off the evening with some fireworks. We were tentative about doing this – but Cailee was set on seeing them. Our prayers for good timing, good parking and little traffic were answered. We found a good spot, with parking with 50 yards, far enough away that the noise was tolerable (although Cailee still thought she had to cover her ears) and Connor could enjoy his first fireworks show (they were rained out last year). We were out of our parking spot in less than 5 minutes and on our way back home – I think all told we did the fireworks in almost 30 minutes (drive time + wait time included). Now I am hoping the kids will sleep in after all that activity 🙂 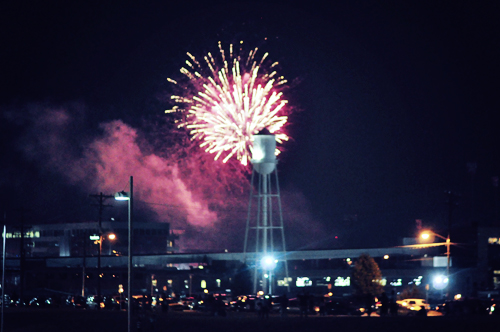 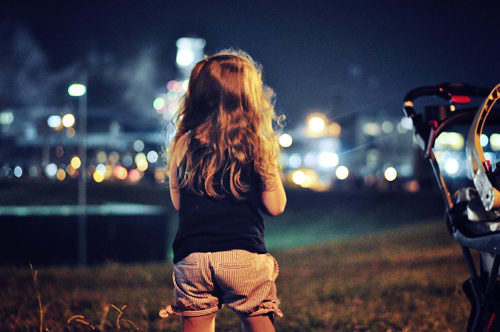 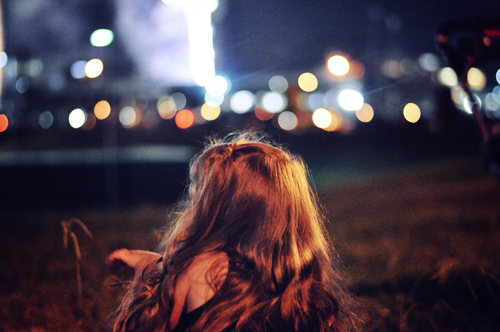 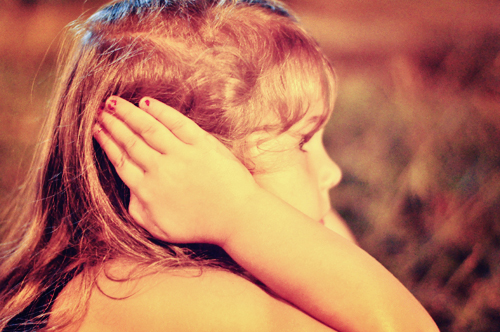