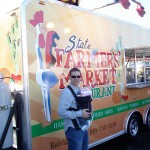 I know its been a few days since I have posted an update and I am sure you ask yourself, what else could she possibly have going on since she is just sitting at home twiddling her thumbs. I do worry that JJ thinks that at times, he’s off hard at work and I am taking naps and eating bon-bons (what are bon-bons anyhow?). I even read in my parenting magazine (see there’s one thing I am doing), that you could actually make a list of what you accomplish in a day and show that to your spouse – I guess that is particularly helpful to us A personality types who feel like we have to be doing something all the time. However, I am very mindful of the fact, that if I actually made the list I might be disappointed in what I truly get accomplished in a day – merely because you never quite complete what you set out to complete when you have a 5 week old strapped to you. But honestly that wasn’t even the point of this post. I was merely going to try and update you as to the highlights of the past several days – just so I could mark this off the list – or add it to the list – depending on if we are making the “just completed list” or the “need to get done list”. 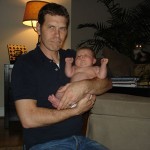 This past week we have been mindful of the new schedule that Cailee is on – and she is adjusting – although some days are better than others. Three hours between feedings, it goes fast at times and however on other occasions, when an hour after the feeding she is smacking her lips to eat again – you know the next two hours are going to require a lot of tricks to get her to hold out (car rides, baths, toys, swinging, holding, just to name a few). 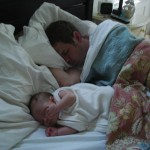 Lately, her sleeping habits are a bit wacky – now instead of being fussy from 6-10 pm – she is generally snoozing – I must say – JJ is probably relieved – however, she has now become unhappy just when its time to go to bed – and it takes a bit of finagling to put her to sleep – we are trying to get into a bedtime routine – complete with warm bath and baby massage (ah, to be an infant again). And at times have resorted to cuddling her in our bed (I know, shame on us). One can never predict what will work, but usually by 11 she is asleep and that’s not too bad I suppose.

We are down to being up just once during the night – generally about 3ish and then back up at 6-7ish – which I can live with (for now).

Yesterday, we ventured to the NC State Fair. Call me the worst parent around – when JJ asked me several months back if we would make it to the fair this year, I thought he was crazy, but I was anxious to see the trailer design in action (see pictures) and get some good grub – so we decided to give it a whirl – us and about a million other people (I did hear they were trying to make the million mark – and apparently everyone decided to venture out yesterday). Apparently the Guinness Book of World Records was on hand to announce the NC Fair as the largest in the nation for 2009. All that and Cailee slept through the entire ordeal in the bjorn baby. I dare say she was the youngest out there, not sure that’s something to be proud of or whether it was just plain dumb.

Last weekend we visited the Parade of Homes (we figured out that Durham, Chatham and Orange county have a different POH from Wake County), again, another sleeper for Cailee, who enjoyed the view from the baby bjorn (thanks Emily – that thing has been a life saver for us, I may have mentioned that before, even if I don’t know how to spell it). We left with a bunch of new ideas for our house – although getting them accomplished will be slightly more complicated now that we have a sleeping baby (or not) and a yappy dog. JJ always gets depressed to leave the huge homes and come home to our significantly smaller dwelling, but any fleeting wishful thought for me is quickly dashed when I have to clean our house – its just right for me.

We have decided to train for the Cooper River Bridge Run, 10K next April. We are well on our way – JJ has been running and biking a lot these days (he actually did 30 miles yesterday on the bike) and I am loving the elliptical machine – not sure how that will translate into running but time will tell. Next goal is to find a baby jogger and I suppose flip a coin over who will have to push Cailee up the bridge/hill during the race.

I am still trying to figure out when the baby dedication is at the church – apparently its not on the calendar as of yet – I am hoping Cailee is still a baby when it is scheduled. And getting a bit nervous about the fact that the holidays are quickly approaching, as is my time to go back to work. Somehow I’ll have to do what is on the list now, plus work, plus shop (now the shopping, I shouldn’t be too worried about – always seem to be able to squeeze that in).

Regardless, I’d better start making a list. I finally posted some pictures that have been sitting on the camera (so mark that one off the list, as well as this post – done!)