Sibling love & a visit to the doc

Cailee loves Connor and is really sweet around him – most of the time. She is still learning that sometimes her excitement can be a bit much for Connor. Her latest is that she always wants to hold him – not sure he always wants to be held. It normally ends with Cailee getting too close and Connor grabbing a handful of hair or a bracelet – and he has a death grip at this stage. So I generally have to pay careful attention when she is “holding” Connor – but this one day, I decided to try and sneak a few photos. 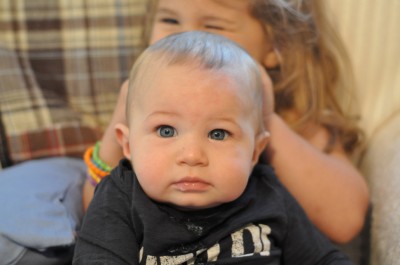 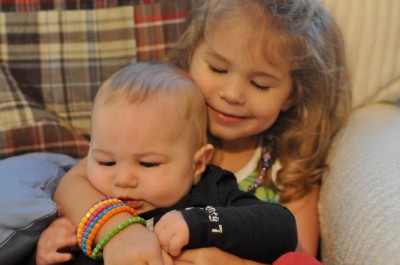 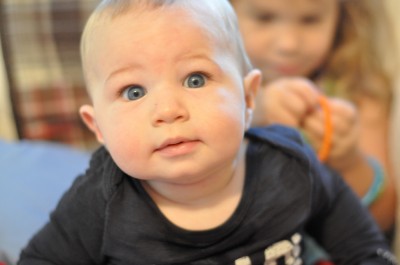 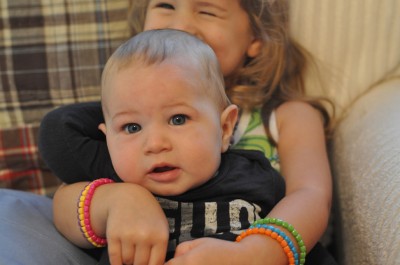 I am a little late reporting on this – but Connor had his six month appointment two weeks or so ago. (It was really 6 months, 1 week at the time of the visit). We timed the visit with Cailee’s 3 year checkup. Both kiddos got their flu shots, so I hope it works for them. At this point, I am the only hold out.

Connor is in the 50% for weight, 90% for height (no wonder he is longer then all the 6 month clothes I have), and 25% for head (I have to go back and look up the actual values, funny how you pay more attention to how they stack up against everyone else – then the actual size). Connor’s proving to not be near as consistent in size as Cailee as an infant – she was pretty much rocking the charts at 80-95% for height and weight – she was just my little butterball. Even still, at three years she is in the 75% for height and weight. The visit was interesting – at three years old they can predict how tall they will be – Cailee’s prediction is 5-6″ – that’s about my height – so we’ll see if they are right. They also wanted her to do an eye exam – this involved her putting on paper glasses which covered up one eye – yea, that’s as far as we made it – I don’t know many 3 year olds that will put something on their head and cover up their eyes, and certainly not Cailee – so now, we have to go back in a few months and try again. I’m not expecting much then either.

This week Connor cut his third tooth and yes, he is starting to bite – its usually at the end of a feeding and he does it, I jump and he grins – its like he’s trying to get my attention – well its working – so stop already. I expect that the 2nd front top tooth is close behind because he’s still chewing on everything. Clearly, he’s ahead of pace here – considering on average these are the 8-12 month teeth.

He’s still rocking, a lot; pushing himself forward, and doing a push up while on his hands and toes. He gets quite frustrated when he is unable to move forward – but he gets around pretty good -either by rolling or throwing himself forward. He is able to pull himself up into a sitting position (yea, that’s a new one from this week). He likes standing up more than anything and will lock his knees so you can not sit him down and if you do – he thrusts his legs out and lays out flat – we had that challenge during our photos – little guy just would not sit beside his sister – so it was plan b, lay him down beside her and shoot the pictures before he decided he wanted to roll off the bench (which thankfully he did not). Never a dull moment around here.