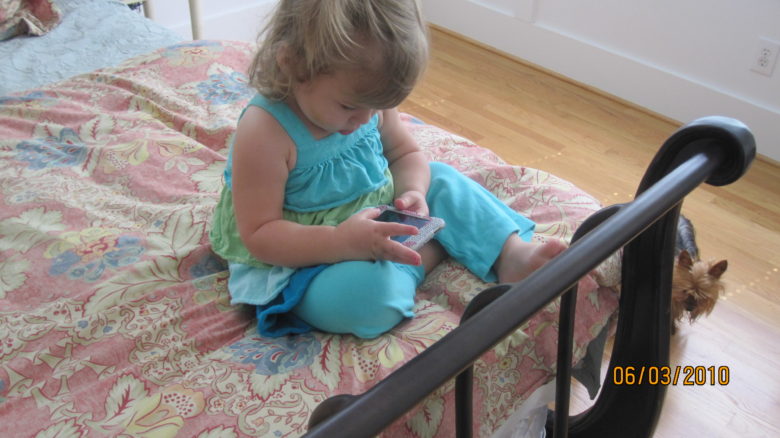 I’m trying something out here – is it possible to multitask on your blog. I am uploading photos to another post in a different browser tab and writing an entry at the same time. The fan on the computer is growing quite loud so the whole darn thing might just explode in a minute (and that could be a hardware or a software explosion) given what I am asking it to do. I just thought I would share a few more photos of Cailee with her “phone” since the cat is out of the bag now. The “Phone” (in quotes because its just an iPod that happens to look like Mom’s phone) is an experiment in itself. We were curious as to whether Cailee would lose interest shortly after having something that she was “allowed” to play with. Was part of the intrique in the fact that she wasn’t really allowed or that it was something Mom and Dad had and she didn’t. So far it seems to have held its own luster and she is rarely without her “phone”. I think that is a testament (good or bad) to how often Mom and Dad (ok, really just mom) are on their phones. She’s into copying a lot – if you catch my drift (do people say that anymore?).

Ok, well the computer fan is still ferocious but it appears this post will go out without a hitch. We’ll see how well the photos are fairing.