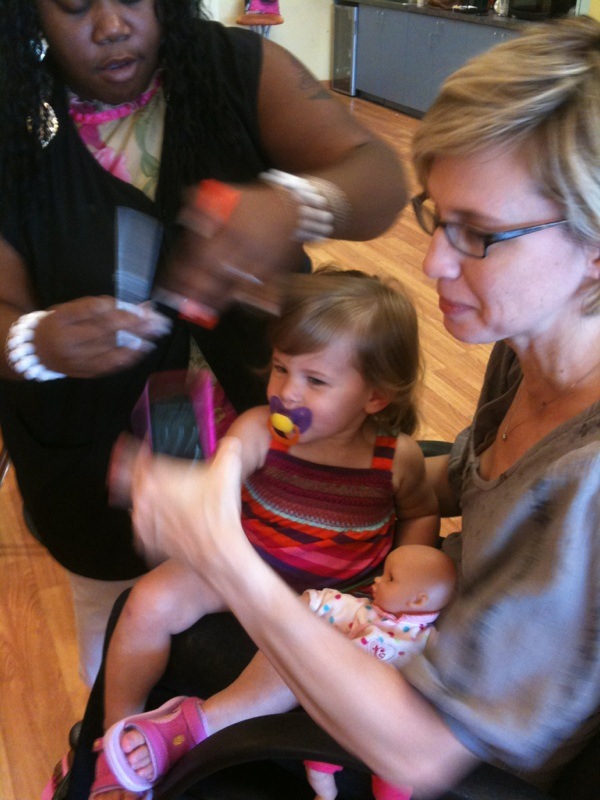 I guess its mother’s day already – its early morning – like 4:50 am – seems Cailee waited til the middle of the night to have a stinky and this woke her up, consequently woke me up and while she is back to sleep, I am still awake. So why not do a little catching up…

Today, well yesterday, we had a busy day. It’s that season again – meaning it’s warm enough that I need to purchase a whole new wardrobe for Cailee. I guess for at least the first two years of her life, (and that might be very shortsighted) Cailee requires new “everything”. From shoes to pj’s – she has to be (ok, “has” might be a bit strong) outfitted (word?) And the scary thing is that, as much fun as I have re-outfitting her every season, unless I were to have another girl at the same exact time of year, then these clothes have a shelf life of just a little over three months. And I know I could be selling them at a consignment store to gain a little return on my seasonal investment, but so far that experience (and the thought of giving up Cailee’s little clothes) has not been worth the pittance they give you. So long story even longer, first stop of the day was to return some shoes that didn’t fit her (still pudgy) feet. We opted for some pink velcro tevas (which took some prodding to get her into to start, and some coaxing to get her out of them later on). Next stop, we stocked up on some warm weather pjs as opposed to the just warm pjs that weren’t cutting it in the recent heatwave.

Then we took the plunge. We took Cailee to Peek A Do. Yes, I feel for the gimick. But I really thought that if they advertise they cut kid’s hair then they have to be more tolerant of the child who gets freaked out by most strangers, let alone the one who wants to put a giant bib on her (we gave up on this years ago), is wielding giant scissors and touching her hair (something mom doesn’t have much success with). And that’s pretty much how it went. No apron, no sitting in the kid inspired seats (a boat, airplane), even dora on the tv wasn’t quite enough distraction. It required, sitting in mommy’s lap, dora on the tv, paci in the mouth, baby (doll) in the lap and the iphone, all this for a bangs trim. We got it, the hairstylist remembered to save some of her hair and Cailee now can see without her hair hanging in her eyes – but after all that I miss the shaggy hair look, just a bit.

Sorry, we didn’t get great pictures, it was pretty much an afterthought – we work too focused on getting Cailee to enjoy (right!) the experience.

Finally, we made a run to coscos for some steaks for our mother’s day cookout. And now that baby goes everywhere with us, Coscos was no exception. The fun part was that since everything is oversized, so are the shopping carts and this one actually had a seat for baby and Cailee. She was a happy camper, for once, in the shopping cart. Too cute.