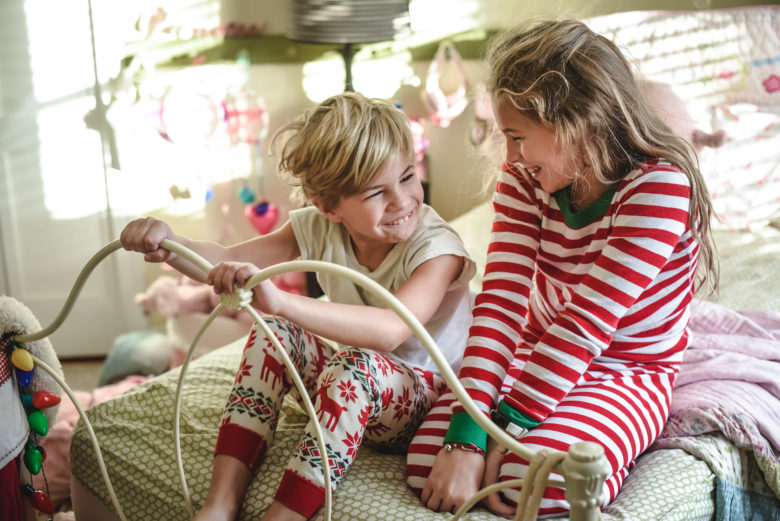 Merry Christmas everyone!  We had a great time this year – once again it came and went too quickly.  The kids were in school until the Friday before Christmas so we spent the last few days leading up to Christmas just getting ready.  We finally put out outside lights and decorations about 2 days before Christmas and made Christmas cookies.  The first batch were everyone’s favorites – the peanut butter with chocolate kisses and they were promptly eaten so we had to make some more.  Aunt Beth arrived two nights before Christmas and Christmas Eve we all went to the Moravian Love Feast in Greensboro.  Then afterwards we ate good food at GG and Gdaddy’s.

Christmas morning the kids slept in until about 8ish.  And I made them wait until about 9 to go downstairs.  This year Cailee read the Christmas story – I think the picture of her with the pig is pretty classic. We attempted to open each gift, one at the time but that didn’t really work, except when we threw out that rule Connor felt he had to ask before opening every gift.

This year, Connor got Star Wars legos, video games for his Nintendo Switch (and Amiibos – little characters that bring new gear and goodies to the games daily – the gifts that keep on giving), a new Bugatti shell for his RC car, an RC boat (he has been asking for this for a LONG time), and a lot of art supplies – that’s really become this thing this year. Cailee got a Nintendo Switch and some games – just in the last few weeks she’s decided she wanted one too so that was the big toy, she got some games, gift cards (Claires and Justice), an American Girl doll bed and doll clothes, and more of her usual loves  – pigs and putty/slime.