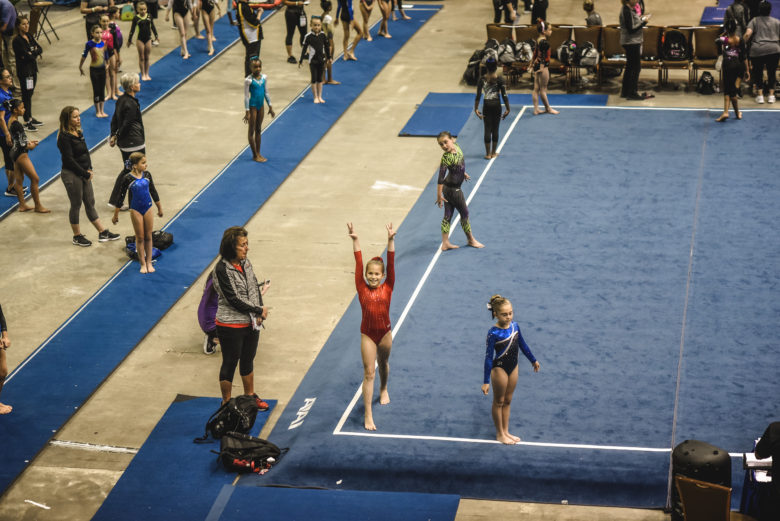 Bringing her best to Southeast Regionals

So many emotions today. So proud of Cailee for qualifying for Regionals, worried for her because I know she wants to do good, frustrated when she didn’t get the scores I thought she deserved and excited when she finished so well.

We watched a few other rounds just to get acclimated to the facility – Cailee was set to compete at 4 – which is good for her – right about the time she practices. She started on floor – which meant her rotation (Floor, Vault, Bars, Beam) was the same as State – also good for her. She did so well on Floor – I think the best routinue she’d done all year – she stuck her landing, didn’t go out of bounds, it looked like she nailed it – so it was a litlte disappointing when she only got a 9.3. She expected higher, so did I. Turns out she placed pretty well in Floor so I guess the judge was tough and all the scores were lower.

This season, Vault has been a bit of gamble but she’s started to finally get it here at the end and she didn’t disappoint. Beam and Bars were no different – if there is one thing Cailee is – its very consistent. She’s basically scored the same for her all around nearly all season, give or take a few points – although this one was one of her best with a 37.55 and 6th AA. Unfortunately, Cailee was still upset – she really had her heart set on top three. And, don’t get me wrong, I love the fact that she wants to do so well, but I also hate that she is so hard on herself, especially when it was a really good showing – and she still doesn’t feel like it was good enough.

Afterwards, all Cailee wanted was Chikfila. So I plugged it into the GPS and it took us right to a college. Yea, maybe the Chikfila was in the cafeteria or something but definitely wasn’t what we needed. Fortunately, there was another one close by, so after our little adventure and a chocolate milkshake, all was forgotten and the kids were back onto begging me to divulge my plans for the next day.