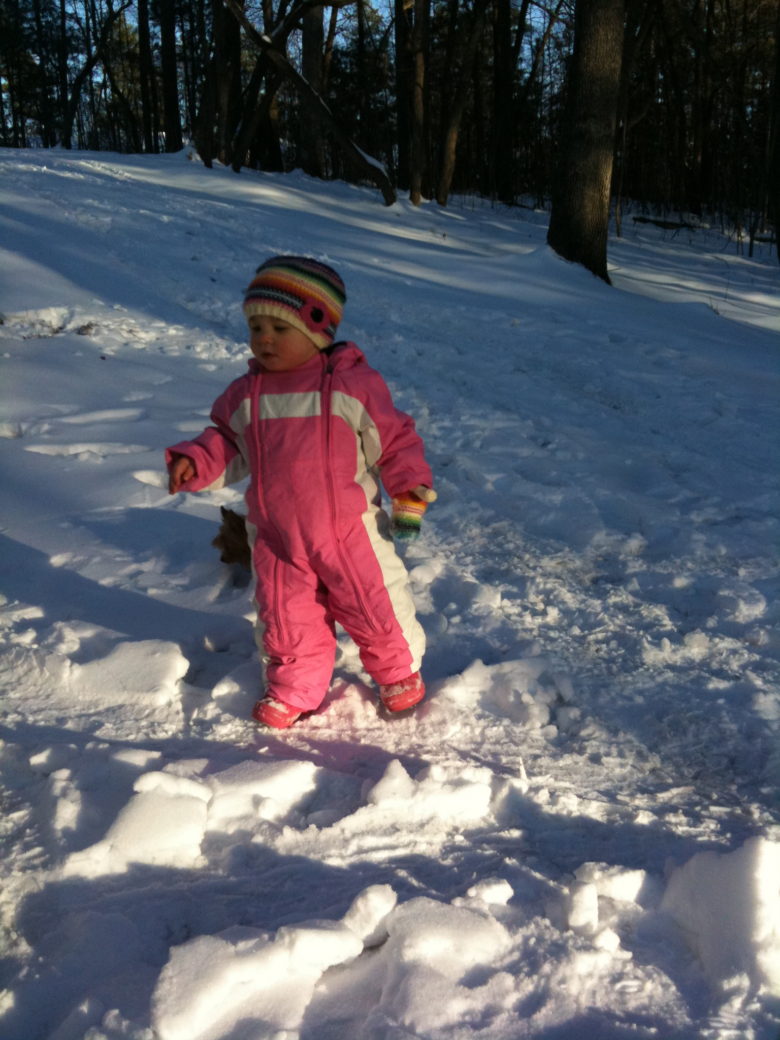 Well I don’t think (yet again) all the hype lived up to the reality – we didn’t get a foot of snow, and an inch of ice as predicted. We kept our power, and we were back out on the roads two days later, but we did get some white stuff, enough to do some sledding, a good excuse for lots of hot chocolate, chili and relaxing by the fireplace, so no complaints here.

On Friday, I spent all day hunting down a sled for Cailee for the much anticipated storm of the year. As much as she loves adventure, slides, and her push car, I knew for sure she would take right to sledding. After a few Ace Hardware stores turned up sold out, I hit up the local baby store. On the phone, they said, come quickly, we only have 6 left, showing up 5 minutes later, proved that to be extremely false – they had well over 206 in stock. I made a point to ask them about that little white lie. I received a sheepish grin in return. Nevertheless, we got Cailee her first sled, nothing like what I had in my days, but one that had a little strap to hold her in, held her in a sitting position and had a rope to pull her – perfect! I fully expected that finding a sled in the south would be the challenge, however, it seems Cailee hated her snow outfit (thanks for the hand-me-down McKinley), her hat, her mittens, the sled and the SNOW!

First time out – she wasn’t having it. We retreated into the warm after just a few minutes (in her defense, it was still snowing/sleeting a bit). Next time around, kicking and screaming, we got her strapped down in the sled (sounds cruel) but once it got moving, she changed her opinion of the white stuff. By the second ride of the weekend she was truly enjoying herself, trying to eat the snow, and grinning ear to ear. So one small victory for mom and dad this weekend.

Walking in the snow proved to be a little difficult for Cailee, so most of the time was spent in the sled – as you can tell from the pics.