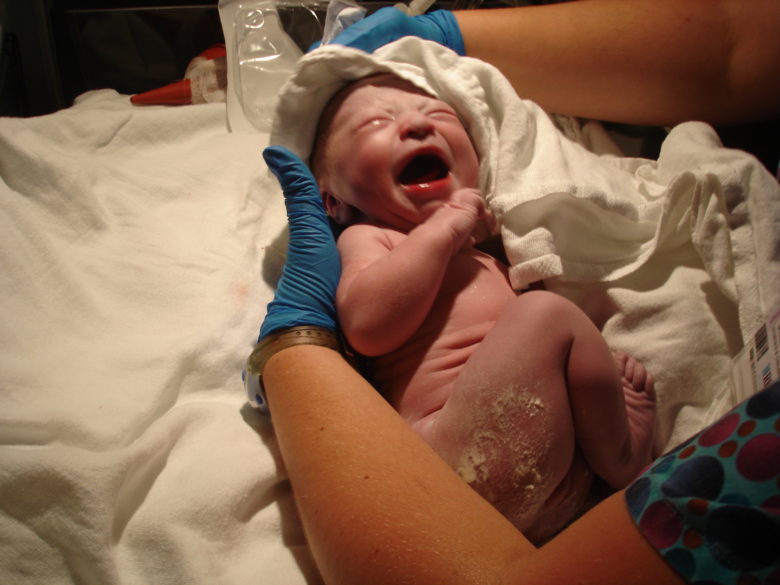 So I have been a little slack in updating everyone with the latest news around our house. Under the circumstances I am sure you can understand. We welcomed Cailee Jaymes officially on Friday, September 12th.

It was perfect timing – just past the 11th and one day shy of the 13th and only one day off schedule (if that’s even accurate). And even though they say that its not genetic how you deliver, after my experience I beg to differ. Not only did the baby come basically on time, reminiscent of my mom’s five deliveries, she came very very quickly – also mimicking family history.

Here’s how it all happened (and if knowing every detail is too much information for you – then you might not want to continue reading and just jump directly to the pictures).

I started to notice some mild contractions for the first time in the entire pregnancy on Thursday. There had been no braxton hicks or false labor and even Thursday there was no consistentency and the discomfort level was nothing more than mildly irritating. By Thursday PM – they had more or less disappeared. JJ and I had a good dinner out (I warned him that it might possibly be the best dinner he might have in the next 18 years, although this has proven false since my mom is spoiling us this week) and picked up our new elliptical machine – I was already thinking of a post baby workout strategy. :).

Friday morning started out much like Thursday, except after two or three contractions I realized that there was a pattern – starting about 7 am, there was an hour difference, then down to 30 minutes apart by 10:30/11ish. I thought I could possibly hold out til JJ came home from work, but that was short lived. Because by 11:15, the contractions were only 5 minutes apart and I knew I needed take action. JJ met me at home, we called the hospital and headed in. The contractions seemed to get more intense, but frequency remained at 5 minutes.

We finally got settled into a room, gown, paperwork was complete by 2:15. The nurse checked and I was still only 2 cm dilated so the question remained as to whether I would stay or be sent home. Going home was not really an option in my mind but considering they sent three home before me – it was apparently highly plausible in theirs. Ironically, by the time I was laying down in the bed, the contractions did seem to slow down. The nurse suggested we walk about the hospital for an hour to see if that would initiate a change – which we did from about 3 – 4:15. We stuck to the ICU hallway because it was quiet. The doctor checked when we returned and this time I was 3 cm. Its not til 4cm that they actually consider you in labor. He decided, thankfully, however, to keep me around and said he would return in ten minutes to break my water. Well it went downhill from here.

The nurse left and within ten minutes my contractions were intense and coming approx. 3 minutes apart. She returned and noticed that they had escalated and immediately ordered the bloodwork necessary before receiving an epidural. She called the doctor back and within 15 minutes of the last time he had measured me – I had gone from 3 cm to 9.5 cm. The contractions were basically on top of each other and an epidural was going to do me no good at this point, although they tried and I have the bruises on my back to prove it – just something about – “Ami, be still” in the middle of a full blown contraction – was not going to happen. Apparently, I was too tense – go figure. Thankfully, throughout the entire ordeal (and yes without pain medicine I can call it that) I didn’t curse anyone or yell, so no regrets there, although I think my favorite line was “Just get her out” which everyone but me found comical apparently.

It was only about 30-45 minutes after we had returned from the walk I was pushing (*all times approx – because I certainly wasn’t doing the best job of tracking the time) and Cailee officially entered the world at 6:26 PM.

Here, I started the day with visions that I might deliver that night and certainly with my progress early on – I anticipated a very long day at Rex, but she had other plans. Ironically, we had coverage of Hurricane Ike, threatening the Texas coast ongoing in the background (as a supposed distraction). And similarly Cailee’s impending arrival bared an uncanny resemblance to that of the Hurricane. Even still, we won’t be using Ike as a middle name, even though it was suggested on more than one occasion.

Cailee is as healthy as a button weighing 6lbs 9 oz placing her in the 25th percentile for weight but she’s 20.5 inches long which is in the 90th percentile for height (we are thinking super model). True to ultrasound predictions, she has a full head of medium brown hair and steel blue eyes. Screaming, and feeding have been no problem for her – and usually in that order.

We brought her home on Sunday, September 14th and she seems to have adjusted quite well to our zoo, as they have to her. JJ and I are thrilled with the new addition to our family and we can’t wait for you to meet her.