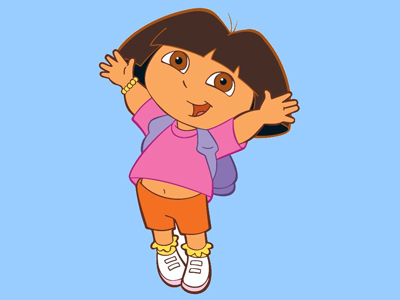 So apparently we have watched too much Dora, the Explorer. There are several tell-tale signs – Cailee makes a really good monkey sound – something like ooh ooh eeh eeh (Dora’s best friend is Boots, the monkey), She commands certain epidsodes by name (or nearly, it took us quite some time to determine which episode was the “Piggies” one – and she is talking Spanish right alongside English these days. Its quite funny because both JJ and I are a little rusty – and we are talking the basics even.

There is “Ayudeme” (spelling is based on Cailee’s pronuncian, and more than likely not correct) meaning – Help me!. Then there are her numbers. While she has been counting since she was 2 years old – now they are a mix of English numbers and Spanish – so its like this “Uno, Dos, Tres, Five, Six, Seven” or tonight I heard “Uno, Tres, Cinco, Siete, Eleven, Twelve”

But the biggest issue is that she is using a word that neither JJ nor I nor Google translate can seem to identify. It sounds like Abu-hey. Its got to be a basic term – that’s all Dora will say – like up, down, push, open, close, etc. The closest we can guess is abajo. But if anyone else has any other ideas – we would love to know. She is using it a lot on us these days and its difficult to know how to react when we can’t even interpret.