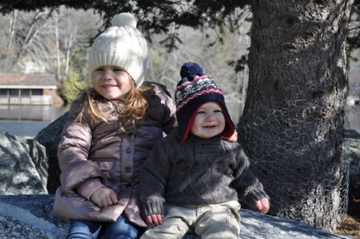 Just like we have for at least the past ten years, we loaded everyone up in the car and headed to the mountains to find our “Christmas vacation” TA – DAAA tree. This year, the car was a bit more crowded with our adorable addition, Connor-man, and the two tons of baby gear that comes with an infant. True to form – very rarely have we stayed at the same place twice – we picked a new home away from home, Chetola Resort. We reminisced about years past that included the haunted hotel (historical fact), the hotel with the broken heater, the 70 degree weather trips, the -5 degree (ok, well it felt that cold) weather trip, there was also the trip that I actually climbed in the pack and play thinking that would help Cailee fall to sleep.

All in all, I will give this a thumbs up, for both the accommodations, and the weather. While accommodations overall were the nicest by far, this year proved to be the most challenging, to date, to get everyone to bed at the same time (without requiring lights and tv to be completely out by 7pm). One day two, we happened to notice a suite being vacated and realized that a little extra dough was well worth it to give us adults a room to watch tv past 7pm, while the little ones could have a quiet room to sleep.

Chetola resort offered some luxuries were haven’t had before. There is a beautiful lake with several swans, I guess swans don’t migrate – because they seems quite content in the icy pond water. When we first noticed them, I was by myself with the kiddos and Cailee took off running towards the swan. Here I am, the crazy mom, screaming for her to stop – she has a perception that she can just pet any animal same as she does with our cats at home. I don’t think that swan was having any of it – he was hissing when she got within ten feet and fortunately, she paused long enough for me to catch up and grab her – or we might have returned with one less hand.

There was also an indoor pool – Cailee and I swam for at least an hour and a half and I had to drag her out of the pool. It was a little surreal being in a pool – looking at people walking by outside all bundled up for 30 degree weather. The suite had a jacuzzi tub and a bidet (yes, I had to look up how to spell that). Possibly, the best thing, were the super dark drapes. In the morning, when the kids were stirring, I went and cracked the curtains open and Cailee got so excited, realizing that it was light outside. She ran and jumped on JJ, “Daddy, get up, its morning outside.” We even took advantage of the super dark room and were able to sneak in nap time. This morning she just looked at me when I had gotten up to feed Connor, around 8:45 and she said, Mommy, I took a long rest,” as if to say, so I want to get up now.

We were also fortunate, this year, to not have to brave driving in the snow and ice, but we could enjoy some that was left over from earlier this week – so we enjoyed our winter weather – without it being too cold to leave our room (like last year).

It was probably at least a week too late to find a good tree – apparently a 7-8 foot tree is quite popular, we eventually, at their instruction, chose big and had it cut down (not sure we had it cut down enough – now that its home, we see that its huge, but we love it – or as Cailee says – its “beautiful”) This was the first time that I think Cailee understood what we were doing and she was so excited about getting the tree. Once we got it tied to the top of the car, she just wanted to go straight home to put it up. Yet, when we finally got it home and put up she said, ok, where are the presents? So I think I finally understand her motivation for the tree.