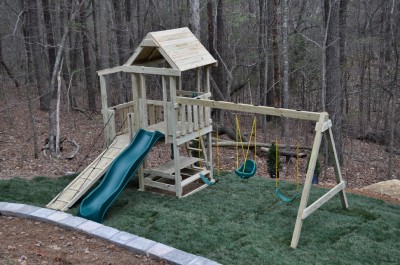 Last year, Cailee and I spent a lot of time at the park. She’s a big fan of the swing, slides and climbing thingamajigs. This year, as the weather is starting to warm (although its like 30 degrees as I am typing this) she is more and more anxious to be outside. Knowing the family changes that are imminent, I knew it was going to be harder to get her to the park while accommodating a newborn and our backyard – a nice way of saying an awkward area with rocks, tree stumps, some pine needles, but mostly dirt – was by no means playable.

So our spring project this year (remember, last year was about the playroom), was giving Cailee and little man (eventually) a backyard to play in. What a difference a few weeks (and a bit of cash) can make.

First challenge was getting some flat ground. Someone once told me if you just kept driving at the base of our driveway – you could commit suicide – not the most pleasant of thoughts – but all too true – past the driveway there was just a serious drop off and the incline kept going well into the woods – making it difficult for even the steadiest of walkers (of which a two year old and most certainly an infant are not) to remain vertical. We relied on the professionals to take care of this step.

Next up – find a swing set, which proved to be one of the more difficult decisions. I had no idea the amount of money you can spend on these things – let alone the options you have. Thankfully, given some good advice, we stumbled on a family that builds swingsets and we are thrilled with the outcome. No, its not the taj mahal – there was that option – but its got what we wanted and apparently, the most exciting thing for Cailee is the wheel (which we actually added on our own). Had we put a post in the ground and attached a wheel she might have been just as happy. Its got a two tier fort, with a plankboard ramp, slide, ladder and rockwall coming off the sides. There are three swings and a picnic table underneath.

Finally, JJ and his dad wore themselves out yesterday, working tirelessly to beat the rain and lay some sod. Cailee is almost as excited about the grass as she is the swingset – she was never a fan of the dirt and so she just “loves” the grass – from her own mouth. And myself, being an instant gratification kind of person – is pretty darned thrilled too.

Final touches are some pine needles around the house, a bit of landscaping (still hunting for what might be deer resistant) and our custom clubhouse sign…

Ironically, when JJ and I moved to this house, the prospects of a natural backyard, which was low maintenance was very appealing, what a difference a few years, and kids will make. 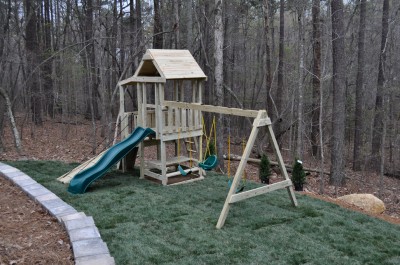 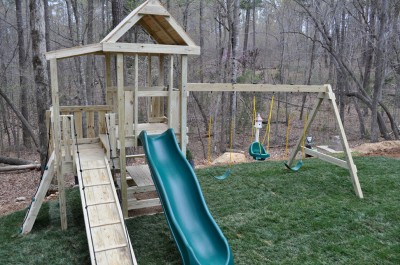 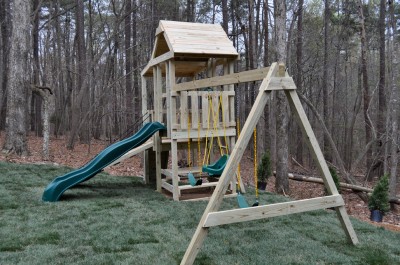 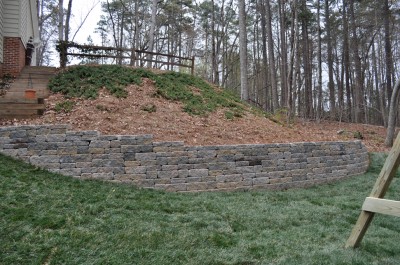