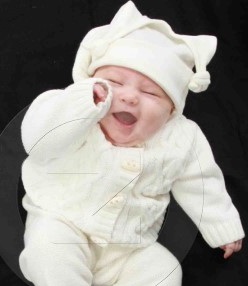 She’s about as photogenic as her mom…

And that’s not saying much… So Cailee had her first official photo shoot this weekend and even though I prayed fervently in the days leading up to the event, she did not have her most cooperative 30 minutes ever. Granted, we just went to Picture People, the walmart of photographers, and even though they tried their best to get my 10 week baby to pose (I know – what were they thinking) and hold a smile – it just didn’t work out that way – even with the photographer clucking and us wagging the stuffed dinosaur with a wobbly neck – Cailee was not much for smiling – or even looking cute. As it was the photos accentuated her double-chin, exasperated the redness in her skin and did little to capture her big blue eyes.

But we can say we did it – mark it off the list and my fingers are still crossed that by the time the real photographer is able to squeeze her come January – she’ll be primed and ready. If you want to see the best of the worst – you’ll have to email me and I’ll send you the link.

My real frustration – The picture people is a digital photo operation- so the beauty of it, they can show you the photos in minutes, and they can print them even faster. However, because I wanted to add some effected – that they toggled on and off by click of a button – they charged me $5 bucks additional when there was absolutely no additional overhead – I guess its how they make money – just don’t try and tell a graphic designer that it warranted anything more than – well, nothing.

Oh and note: She has her eyes closed – who does that remind you of?