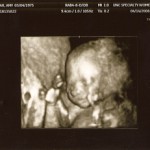 Smile for the camera *almost*

I think I counted the days to this date for a long time. Organized (although I am just starting this blog at 7 months down) is probably an understatement for me and so for anyone that really knows me, anything standing in the way of planning would really be an aggravation – and in this case – not knowing if Peanut (the term affectionately coined by JJ) was a boy or girl left everything unchecked on the list and undoable save window shopping (which I had done plenty of). 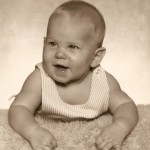 April 14, 2008 at 8:00 am was the scheduled date. We could have gone a week early but I was in Las Vegas for work (check out the early baby bump as it doesn’t look that way for long). At first the baby was quite obstinate – sitting indian style – not a surprise – considering I have been told that was a favorite position of mine. We almost thought we just weren’t going to find out – but low and behold – the nurse’s intuition held up and the baby was identified as a girl. Ironically, the only name we had come up with so far (thanks to the Miss USA pageant held the previous Friday) was KayLee. And so therefore in my head – the baby was no longer just a bump but had an identity – whether or not this name held up in the running.

See all the pictures from March and April. Mom swears she can see JJ in the baby’s face already. What do you think?