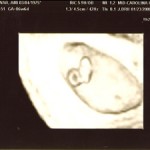 I know it doesn’t look like much and at this point but it’s been confirmed that we would soon no longer be just two (not counting all the animals) in our family. JJ calls it “peanut,” (hopefully this nickname doesn’t stick but it does seem fitting at this point looking at the images) and even though there isn’t much visual indication of a little one – hearing the heartbeat for the first time was such a crazy experience that made it all seem real finally. Here are the first pictures.

Here’s what we know – the baby’s due date is September 11, 2008. We’ll find out the sex sometime around JJ’s birthday in mid April but our sense is that its a boy (I should have known better considering there are four girls in my family). It wasn’t entirely a gut reaction – We had been advised to consult the Chinese calendar which is 95% accurate – and I did test it out on everyone I could think of and it proved to be correct – I supposed I was in the 5% – only hoping now I am not in the 5% to deliver right on their due dates.