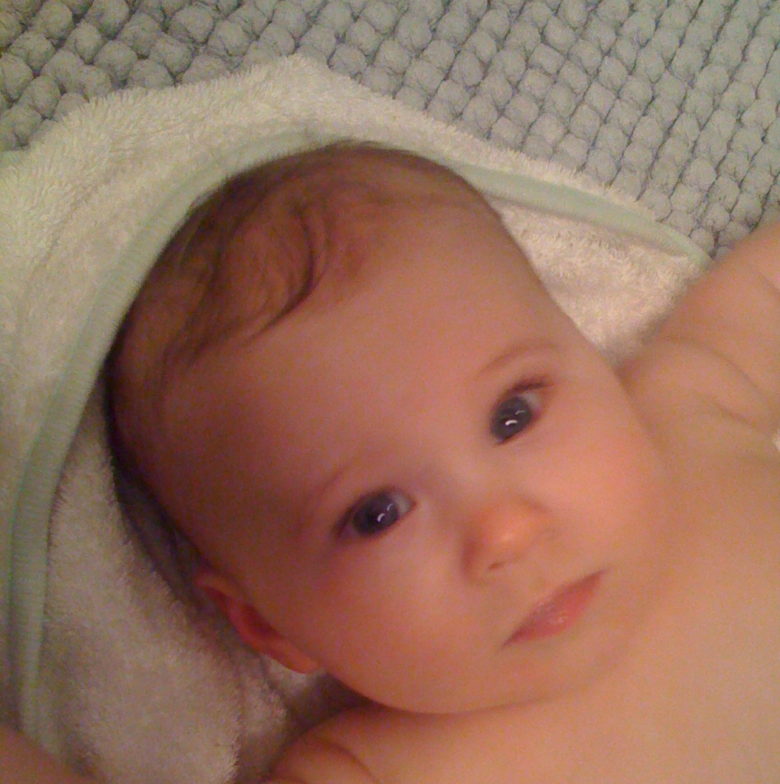 uh oh – Confirmed – she’s laughing when I say no

Well so I thought yesterday was a fluke. Perhaps she was just in a happy mood and nothing would shake it. And not to say that she wasn’t in a good mood today – well, let me explain. There’s this picture above Cailee’s dressing table and of late – that’s her fascination when she’s being dressed or changed. To the point where one day she is going to bring the 24×36″ canvas down on herself. At first it was cute, oh look, Cailee can grab the picture, but now its turned into concern with visions of cute baby with honking bruise from pulling large picture on down on herself. Clearly, it was a rookie mom mistake to put it there in the first place and I am told that in no time, I won’t have to worry about clutter around my house, because there won’t be anything left standing below four feet. But back to the subject at hand – the picture and offending, yet extremely adorable infant. Nevertheless, I decided to try my hand at discipline. I should say – first time out the gate – not so good. I said no, pretty firmly, and took her hand away. Well, hand went right back and she laughed – audibly laughed at me. So back to my prologue – it wasn’t a fluke. I tried it out again today and I got the exact same response. Now, maybe its that she associates No with the dog – its a familiar statement around our house – No, no Lola, stop it, no, don’t do that, and honestly, that’s my consolation at the moment, what else can I hope for, either that or a child that just doesn’t need to understand the words “No” because she’ll never misbehave again (ok, I know, lack of sleep has finally caught up with me and seriously muddled my sense of reason). Well thank goodness tomorrow is another day.

How can you really discipline this face anyhow? (I am off to a great start on this parenting thing).