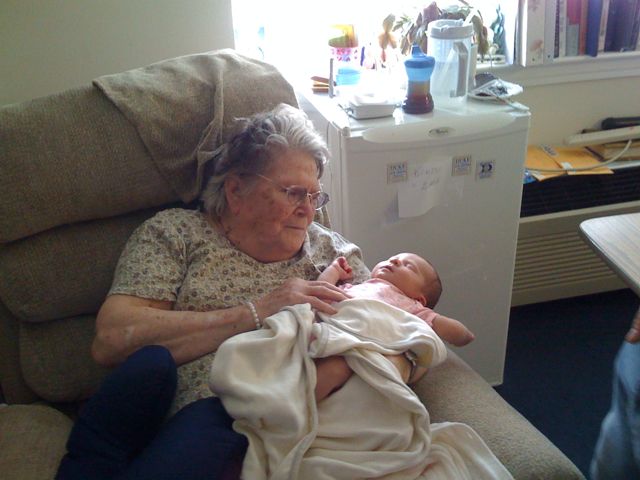 What will they think of next?

It seems hard to fathom some of the things that you can do because of technology advances. Take for instance, today we took Cailee to visit her great grandmother and I was able to use my iPhone to take a picture, email it to several family members, plus add it to my Facebook profile (don’t forget the fact that there is a dogbook and babybook, I mean that alone provides legitimacy to the title of this blog) and add an inline comment. Now, fast forward a few hours and I find myself waiting for an extraordinarily long time in the drivethrough at Starbucks, and just cuz I wanted others to know my pain, I have been able to update my twitter status to this effect, which consequently updates my Facebook status, and displays the same status in the left navigation for those following this blog. As if that’s not cool enough, this post is being written and published from my phone, picture and all.

Seeing three (well four actually, just one was not present) generations in the same room today made me think not only of the huge strides we have made since the early days of Cailee’s great grandmother, but what can we expect in the years to come? While it’s impossible to guess, I have no doubt we will continue to be surprised by what they will think of next. I mean did anyone ever guess that cars would be fueled by corn? Or that brick and mortar libraries would be replaced by the Internet, a resource that spans the world, covers everything imaginable and connects strangers to strangers. And sadly, I know it won’t be too long til Cailee is explaining to me what new fangled technology is available as it seems innovation is reaching a younger and younger audience every day.

One idea I just read in a parenting magazine (yes, I am reading parenting magazines) was to take a throw-away camera and capture pictures of common objects today and store it away undeveloped for several years as an easy way to create a time capsule of sorts. My only concern, what if traditional film can’t be developed in several years – the reality of this can’t be too far from realization.

But back to the present and if I could just make one suggestion -please find a way to automate the ability to make the drinks at Starbucks, it’s still taking way too long.