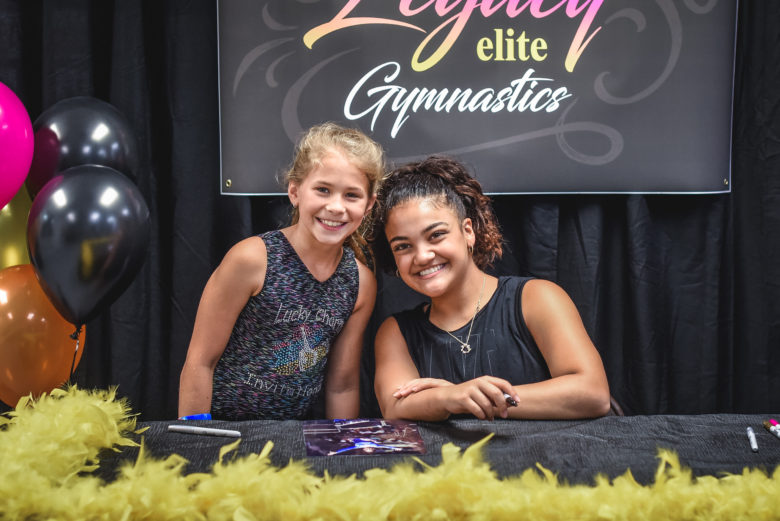 This was a fun weekend! Through Cailee’s gymnastics she participated in a fundraiser, where the girls that raised at least $250 got to meet Laurie Hernandez. Little did I realize what a racket this thing was – it turns out I donated the initial money to get her into the event, figured it was a good premise, she was with her friends, could meet an elite gymnast and it would be a win win all around. I didn’t realize that from the time I initially signed up til the day of the event there would be mini competitions to raise more money – like “raise at least $50 today and enter the handetand contest judged by Laurie”, or “everything you raise will be doubled and the top 30 get an extra 30 minutes with Laurie” – well who wants to not do those things too?? So nearly $1000 in the hole, the big day finally arrived. Cailee got a photo autographed, did the handstand contest (lasting for nearly a minute, she only got edged out by one of her teammates), was chosen to ask Laurie a question during the Q&A and did earn the 30 extra mnutes where she learned a bit of Laurie’s Olympic floor routine (the more artistic dancing part). It was a hot day, and 300 people were crammed into a metal warehouse gym, with the air conditioning clearly maxxed out long before it cooled everyone down but I think Cailee had a good time and it will be something she hangs on to for inspiration. We’re even reading her book every night! Hoping to pick up some of her positivity – Cailee, you got this (Laurie’s signature line!)